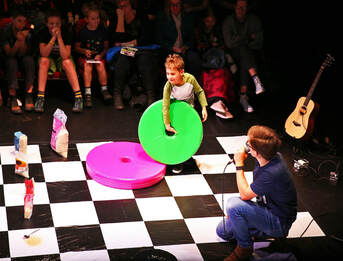 MATHS MADNESS
This action-packed inclusive family show brings together some of my favourite demos that I've performed at festivals & shows over the last couple of years, including: T-shirts of Hanoi, a Fibonacci based folk song, the paper folding world championships and an attempt to fit the world's entire rice output onto a giant chessboard (this part isn't *always* successful.)  Suitable for ages 8+ ideally, 5+ at a push.  This show was featured on BBC Breakfast during its full-house Edinburgh run in 2019. 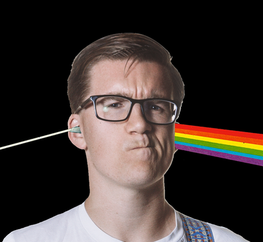 POP SONG'S FOR PEDANT'S
In my brand new show for 2019 I cast a mathematical eye across pop music and pop culture and wonder if there's a place for all this pedantry in a world seemingly going to hell in a handcart.  Expect songs, fiendish wordplay and weapons-grade pedantry.  Suitable for teens and above (a small amount of adult humour.) 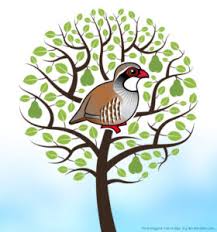 THE TWELVE DAYS OF CHRISTMATHS
This talk can last anywhere from 30-60 minutes and be tailored for any level of mathematical expertise, including absolute novices.  Contains a veritable smorgasbord of Christmas related maths, including: Pascal's triangle, Fibonacci numbers, quadratic functions, various other number sequences, combinations & permutations.  Plus some maths history and a few songs for good measure.  Obviously you can only book me for this from around mid-October! 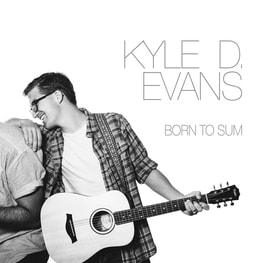 BORN TO SUM
From Bob Dylan and Beyonce’s algebraic song titles to Kate Bush’s (near) perfect recital of pi to fifty decimal places, pop stars have been dropping maths references into their tunes for decades.  It just takes a certain kind of mathematical pedant to notice them all...

Enter folk mathematician Kyle D Evans and his trusty guitar, here to take you on a comedic musical tour through some unexpected parallels between maths & pop.  Come prepared for a fun night for maths enthusiasts and novices alike.  Suitable for teens and up (some adult humour.)
*Best Stand-up, Swindon Fringe 2018  **Famelab UK Winner 2016